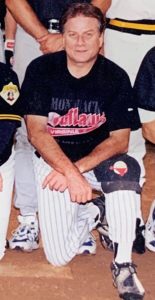 Roger was one of the eight (8) original DCMSBL 30 and over team managers when the league began in 1989. Within two years of the inaugural season, Roger became the DCMSBL League Treasurer, a position he held until his passing on August 16, 2019. Roger was multi-talented because he created and wrote the scheduling software and the software code for the DCMSBL. Roger was the League Webmaster from the first day the DCMSBL went online, which was in 1998, only a few years after the Internet was available to the public!

Besides being the League Treasurer, Roger managed a number of DCMSBL teams over the years in the 30+ and 40+ age groups and managed a number of DCMSBL teams in the National MSBL World Series in Arizona. Roger’s Arizona World Series teams managed to make the playoffs almost every year. At least two of those years, Roger’s teams made it to the 40 + National Championship!

Roger was one of the six (6) original DCMSBL Hall of Fame Inductees in 2008. Roger also was inducted into the MSBL National Hall of Fame in 2005 and in 2012 Roger received the MSBL Lifetime Achievement Award.

Roger’s impact upon the DCMSBL was immeasurable and there would be no DCMSBL without Roger’s commitment, talents and love of the game – and for that we all owe him our gratitude.

Roger was the beloved husband of Patricia for 51 years. He is survived by Pat, six daughters, Sherri, Denise, Kristi, Jamie, Nicole and Cory; three grandchildren, Romeo, Jaslene and Vincent; as well as his brother, Warren and his family, and his brother-in-law, Stephen.