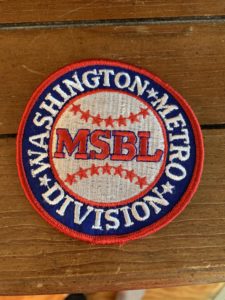 Larry Lombardi was one of the two original founders of the DCMSBL. Larry has been involved in organizing and managing the DCMSBL since 1988. During the summer of 1988, while vacationing on the Outer Banks of North Carolina, Larry happened to read an article in the July 1988 issue of Sports Illustrated Magazine about Steve Sigler and the Men’s Senior Baseball League.

In the article, Steve Sigler described a league where adults played in a 30 and over hardball league on Sundays in Long Island, New York.  Since Larry received his BS Degree in Physical Education, Recreation and Health from the University of Maryland in College Park, he concluded there could be no better way than to leverage his skills and expertise and organize a 30 and over adult amateur baseball league in the DC Metro area.

Larry made a few calls, and there was no turning back. In April 1989, the DCMSBL began its first season with eight teams playing in the 30 and over leagues. At that time, Larry was the League Commissioner and became the League President within two years. By 1991, the DCMSBL 30 and over leagues had expanded to 18 teams. Under Larry’s leadership, the DCMABL (now the 18+) was introduced in 1992.

From there, the DCMSBL has continued to expand in the DC Metro area, Maryland and Virginia to become one of the largest MSBL leagues in the country today. The DCMSBL has five age divisions (18+, 30+, 40+, 50+ and 60+) and a wood bat division in each of those divisions except the 18+. In 2023, the DCMSBL will be celebrating its 35th anniversary with more than 60+ teams playing in both the Spring/Summer and Fall Leagues.