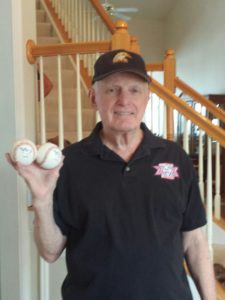 I joined DCMSBL in 1989 by forming a team called the Knights, later changed to the Silver Eagles I also served as treasurer of the infant league. I don’t recall much of what or how we did but do remember the tremendous enthusiasm among the players to be playing baseball again in our 40’s and beyond. I recall playing in both Arizona and Ft. Myers for many years, winning a MSBL national championship with Chicago and receiving MVP nods in a few MSBL and Roy Hobb’s tournaments.

My passion for the game started at age 8 in a tryout for Little League in northern NJ. In my tryout I hit well off a 12 year old who became a 20 game winner with the Cubs. I was certain that I would eventually play at that level.

In high school I pitched and played first base. I knew I could play and thought I could pitch but am sure that I got hammered from time to time. I chose not to remember those games. On October 8, 1956, I cut school to go to a World Series game with my dad. We were treated to Don Larsen’s perfect game. I still have the ticket and many memories. At school the next day, I was called to the office. The principal and the staff greeted me with scowls and the silent treatment. I thought I was in for a suspension. Finally, he said “tell me about the game.” Everyone except me thought that was funny.

During my junior year in 1958 we moved to York, PA when my dad became president of York College of Pennsylvania. I attended a new school, made the baseball team and threw a one hit shutout in the first game. I had two good years in York playing high school and summer ball.

From 1960-1964, I attended William and Mary College. Freshman were not allowed to play so I spent my freshman year pitching batting practice to the varsity. In my sophomore year, I selected accounting as my major as I was good with numbers. After one of our road trips, the accounting professor called me in and voiced his displeasure that I had missed a week of classes. He said that I had to make a choice between accounting and baseball. With my dad’s grudging approval, I chose baseball and have never regretted the decision.

During the next three years, I felt that I pitched well but had little to show for the effort. I remember a few games that stood out. I lost to a NCAA tournament bound Penn State team 3-1, beat Virginia 6-5 and two weeks later lost to Virginia 2-0 while allowing 14 hits. Many games were low scoring, but since we did not hit, we had little chance to win. Having the opportunity to compete is great but losing stinks. Two other games come to mind. One was against the University of Pittsburgh and Paul Martha, a gifted athlete and later, a defensive back with the Pittsburgh Steelers. He popped up against me and my 3B called me off, but the ball fell safely as it grazed the back of his head. He was drunk and shouldn’t have been on the field.

The other game involved Rod Thorn from West Virginia University. I pitched the 1st game and lost 8-0. I only gave up three hits and perhaps one or two walks. Obviously, hitting was not our only deficiency. I didn’t have any trouble with Thorn, striking him out at least once. He was a left-handed hitter and I had good luck against lefties. In the second game, I played 1B and Thorn hit a rope down the first base line. I made a diving catch and was feeling pretty good. Thorn came all the way down to first base with his bat in hand, stopped at the bag and called me a “sorry m-fer”. I had never been called “sorry” before.

I worked hard during these years and competed as best I could. In my senior year, I was awarded the award for baseball at the school’s sports banquet. That was special to me. I was looked at by the Cardinals, Phillies and Twins but each declined to sign me. They were looking for guys who could throw at least 90 mph and whose fast ball would knock walls down. My velocity was not at that level. End of dream.

Other memories go back many years and include two events that come to mind. One was a banquet put on by a group called the Emil Verban Society. Mr. Verban was an infielder of little note with the Cubs and the Cardinals. A government worker in DC started this group to honor the “average” ballplayer and the groups only function was to hold a luncheon every two years at a hotel at 16th and K Streets in downtown DC. Each luncheon drew roughly 500 attendees. The draw was the presence of former major league players, mainly from the Cubs, who came and told stories. Speakers I recall included Ernie Banks, Andy Pafko, Don Cardwell, Bill Hands, Joe Pepitone and Randy Hundley.

The Smithsonian Institution held a series of baseball related evenings on broadcasters. They invited, among others, Mel Allen (NY Yankees), Harry Carey (Chicago Cubs), Ernie Harwell (Detroit Tigers) and Red Barber (Dodgers and Yankees) to discuss their craft and remembrances of their careers. To a baseball junkie, these times and others like them provide a lifetime of enjoyment and memories.

One of the toughest moments for me was to recognize that my skills have diminished and that I might not be able to play this beautiful game again. This is something we all go through, but it doesn’t make it any easier. Making this reality more palatable was the 2019 Washington Nationals. Most of us are old enough to have wondered if we would ever see a baseball championship in Washington during our lifetime.  But we did and, and we hope it will happen again. The Nationals provided one of the most enjoyable and rewarding baseball seasons that anyone could imagine. I can’t begin to count number of calls I have had from friends, clients, teammates and opponents who also enjoyed the journey and who wanted to talk about the team’s success.

I know that everyone who might read this has similar memories and experiences, and I hope you enjoyed yours as much as I have mine.