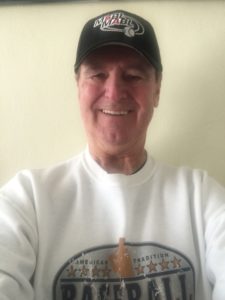 In 1998 while playing for a Ponce de Leon team, a number of my teammates including Bob Janis told me about a more competitive baseball league.  That league was DCMSBL.  I did not hesitate to sign up and began playing for the 35+ Giants being managed by Drew Valentine.  In 1999 when Drew stepped down I took over as manager of the ballclub.  We had much success as we won the 40+ American Division and League Championship in 2001 and the American Division Championship in 2006.  I participated as a player/manager.

In the interim I participated in the DCMSBL 2000 “Ice Baseball” marathon at JEB Stuart High School to ring in the New Year.  I became one of the first “homegrown” DCMSBL umpires under the tutelage of Dave Bowen.  I played and managed a team of all stars at Cabin John Regional Park to raise money for a young man, Mattie Stepanek, who was battling cancer.  It was at this game that I first met the legendary Del Norwood.  I put the lineup card up in the dugout and spelled his first name “Dell.”  He immediately told me to correct the spelling to “Del.”

With Jerry Klemm, Bruce Palmer, Tim O’Brien, Chris Guerre, and Jamie Tickle, I was a member of the League Committee from 2008-2009.

After retiring from the Federal Government in 2002 I was interested in coaching high school baseball.  I was hired by Dan Pototsky in 2002 off the DCMSBL website to be an assistant at Thomas Jefferson High School for S&T.  I took over the helm in 2006 and stayed until 2007.  In 2008 I became the head varsity coach at JEB Stuart HS (now Justice) and remained there for my 14th season.  During my high school coaching career I have always made it a priority to ensure my fields can be used for DCMSBL play.  My most recent teammates have been the DC Mets and DC Dodgers in 60+.  I look forward too many more years of a wonderful relationship with DCMSBL.  The friendships established will always be cherished.