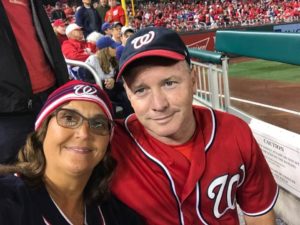 Pete Jones has been a member of DC MSBL since 2006 when he joined the 35+ Knights. He moved to the Suburban Senators in 2007 before finding a permanent home with the 35+Twins Baseball Club in 2008. Team founder Rob Bohn then entrusted the Twins to Pete’s leadership in 2009 and he’s managed the team ever since. Pete also has participated in 45+ (now 40+) since 2008, playing for the DC Thugs, Rangers, Pirates, and Fairfax Americans before he and Robbie Guenther created a 40+ version of the Twins in 2018. Pete enjoys playing in the MSBL World Series every October in Phoenix and has had the privilege of joining the Washington Rattlers numerous times at the MSBL Kickoff Classic in Las Vegas.

Pete’s time in adult baseball began in 1992 when, while serving in the US Air Force at Langley AFB, Va, he helped form a league in Norfolk. Attending an open tryout for that league featuring more than 500 aspiring adult ball players, Pete decided to skip the tryout and form a team of airmen from the base softball league at Langley. That team, Air Force 1, won a pair of championships in Pete’s 3 years leading the team. In 1995 the USAF sent Pete to Germany, where he lived on the German side of the border with the Netherlands. Pete was quickly invited to join a nearby Dutch baseball club, the Heerlen All Stars, in Heerlen, the Netherlands. Pete managed the club from 1995 to 1999 and helped the team promote to the 3rd highest level in the Dutch club system, the highest Heerlen had ever reached. Upon returning to the US, Pete lived in Prince William County and helped form a new league there in 2000. His team, the 18+ Northern Va Dodgers, won 3 titles in his 5 years with that league. As league president, he coordinated field use between the leagues with Jerry Klemm many times over the years. In that capacity he became familiar with the DC MSBL and made the permanent move to the league in 2006. And while Pete and his wife relocated to the Virginia Beach area in early 2019, Pete still works here in northern Va, commuting weekly, and plans to continue playing weeknight 30+ baseball in the DC MSBL.