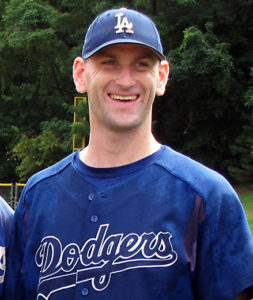 Patrick Conley joined the DC MABL in 1998 as a player for the 18+ Silver Spring Dodgers, who were managed by Carl Sandford at the time.  CJ Ford, who was a high school friend and teammate, introduced Patrick to the team.  Patrick played for Carl for five seasons through 2002. Following the 2002 season, Carl decided to resign as manager.  Several of the players were not ready to “hang up the spikes” including Patrick, so he decided to keep the team going and took over as manager & player beginning the 2003 season.  The Dodgers won their first league championship in 2005.  They continued to win the league championship again in 2006 & 2007. In 2008, the Dodgers lost in the semi-finals. In August of 2009, the Dodgers returned to the championship and won their 4th in the past five seasons.

Since 2003, the Dodgers have won the league championship 4 times out of the past 7 seasons, and have an overall record of 113 wins, 34 losses, and 2 ties.  Patrick played baseball at Prince George’s Community College in the late 1990’s, and later transferred to play ball at Shenandoah University.

2010 will be his 13th season as a member of the DC MABL.  He also currently plays for the Linthicum Expos in the Chesapeake MSBL.  In 2004, Patrick was a player & co-manager of the MABL World Series Runner-up Fairfax Yankees in the 18+ federal division.  In December of 2009, the Silver Spring Dodgers were selected by the Washington DC Home Plate Club, as the top adult baseball team in the Washington DC Metro region in 2009.  The Dodgers received the Del Norwood adult team of the year award Sunday, January 31st 2010 at the 53rd annual Home Plate Club banquet.  The 2010 season will be Patrick’s 8th season as manager and his 13th season as a player for the 18+ Silver Spring Dodgers.