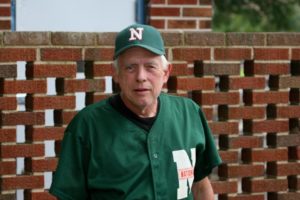 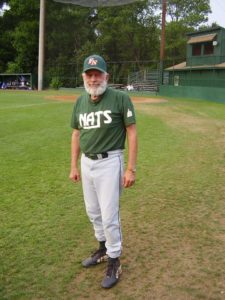 The late, great Jim Beck passed away just on Jan. 12, ’08. For many of us, there still is not a day when we don’t think about quacking rabbits, Norwegian goggles, or some unique experience we had with him.  Indeed, Jim touched the lives of countless people throughout the area, from Little League teams to men’s leagues, from players and coaches, to the many charitable organizations he supported over the years.

Jim Beck was a longtime baseball patron, coach and player in the Northern Virginia area.  He coached at every level of amateur baseball, from Little League and Babe Ruth, to high school and adult teams.  For the last several years, Jim coached baseball at Falls Church High School, and was the co-founder and President of the Fairfax Nationals, a summer college team in the Clark Griffith Collegiate Baseball League.  He also served as the team’s bench coach and team motivator.

Jim was also on the roster of several adult league teams throughout the area and regularly played upwards of 100 games per year, often traveling to Arizona and Florida to play and coach in tournaments.  As a charter member of the DC Men’s Senior Baseball League, Jim’s energy and passions were instrumental in making it one of the nation’s largest adult leagues. Jim was also a long time member of the Home Plate Club and was previously honored for his contributions to local baseball. Jim was a member of both the DCMSBL Hall of Fame and the Home Plate Club Hall of Fame.

Jim also left his mark in the community as a tireless contributor to youth clubs and other groups supporting community events and activities, which included the Rotary Club and the Fairfax County Baseball Council.  As the owner of A.J.’s Sport Shop in Vienna, Jim was a long time friend of many Northern Virginia sports memorabilia buffs.

Jim was the father of Karen, Kristen, James, Ted, Monica and Walter Beck. Jim lived in Fairfax, along with his wife Lynda, and their children Walter and Monica.

“Don’t worry about the mule, just load the wagon!”

“How do you throw a ball that moves so slow and still moves forward?”

“What should I do next time, Jimmy, roll it to him?”

“…Queens rook to Kings bishop four… Just like we practiced.”

“Walter, son, you’ve GOT to get your body behind that ball. The pain you might feel for a minute if the ball hits you is NOTHING compared to the lifetime of humiliation you’ll feel if you miss it.”

“SOMEBODY’s got to turn them LIGHTS on before SOMEBODY gets HURT!”

“Ya can’t fight a war if you’re playing in a baseball game.”

“I throw just as hard as a major league baseball player, it just takes my ball a little longer to get there.”

“I hear those ducks a-quacking!”

“You know, baseball players are smarter than football players.  When was the last time a baseball team was penalized for having too many players on the field?”

“…it doesn’t matter what sign you give me, they’ll all come in the same……” (Jim talking about how he throws 9 different pitches but they all look the same)

“Ultimate power resides in the hands of those who know how to use it.”