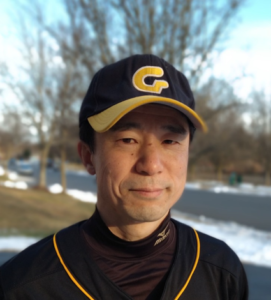 Koji Nishimoto grew up in Kumamoto, Japan and moved to northwestern suburb of Chicago in 2001, then move to NOVA in 2004. At first, I joined a softball team introduced by some Japanese friends, and they told me about the new Japanese baseball team that was Golden Islands. I Joined Golden Islands when the team started the first season in DCMSBL in fall of 2005. I started managing the team for the last 15 years since 2007 after I took over as coach from the team founder, Mr. Higashie moved to Canada. I also enjoy playing for 40+ Twins since 2020.
I am a father of 19 year-old daughter and 14 year-old son. My daughter played softball in high school and my son played baseball in little league until COVID19 pandemic. My wife is also Japanese, and she always supported me to play baseball and manage this team. I appreciate my wife to keep me healthy by cooking mainly Japanese foods, since I can still play baseball like the other younger guys after turning 53. My father was playing softball in the national tournament for 70+ age group in Japan, so I am going to keep playing baseball in that age.
Golden Islands has a record of 162 (W) - 207 (L) - 9 (T) out of 378 games since 2005 and won a tournament in 2013. The team had all Japanese players in 2005 when started, and now we have several Japanese and American players as well as a Taiwanese and Korean player.
Our core players, Erik Cecere, Cameron Emmett, Dan Hantz, Jeremy Klemm, Christopher Lin, Armando Machuca, Cliff Mayo, Trey Smith, Fumiya Togashi, Christian Treubig, and Kenta Umetsu, are making it to most of our games, so they make my manager’s job easier not to worry about being short on players.
I feel grateful to be able to play baseball games every time I warm up before each game. Always thanks to my teammates, league, and environment that allows us to play baseball. I am looking forward to playing some more fun games in the upcoming seasons with Golden Islands and Twins.