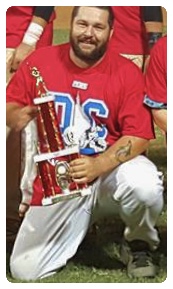 I love baseball! I’ve been playing for almost 30 years. From T-Ball, to Little League, to Seniors, Big Leagues, and DCMSBL. In addition to playing I have coached and managed teams and am a trained and certified umpire with experience in “umping” both Little League and Senior Games.

I began my “baseball career” in Londonderry New Hampshire in1987 playing “T” Ball and Little League, moved to Sterling Virginia in 1991. I was selected for, and played on, the Big-League County All Stars and played in the state tournaments two years in a row (2001 and 2002). I “discovered” DCMSBL while searching online for adult leagues and started playing in the league in 2003.

I have played on the Marauders, the Reston Pirates, the Fighting Lloyds, the Kapital City Royals and the Loudoun Sharks, and helped win the League Championship with the Reston Pirates in 2014. With a group of friends from the All Star experience, we formed the Loudoun Sharks in 2004 and I’ve played, coached and managed the team through good seasons and bad until we finally won the Championship in 2015 – and the Sharks will win it again.