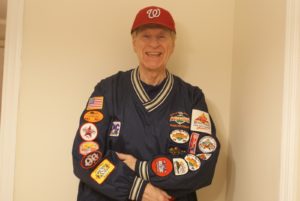 I have been involved in baseball since 2nd grade. T-Ball, Little League, Babe Ruth, High School, College Fraternity, Semi Pro and then MSBL. Started participating in MSBL World Series in 95 and attended through 2011.

Managed national Father/Son team at MSBL WS from 1999 through 2011. Won ring in 2005. Umpired my way through college and many years after including Little League (Vienna Chief umpire for many years), then LL District 4 Chief Umpire. Selected for LL World Series. Umpired in MSBL World Series in 2010 & 2011.

Retired from IBM in December 2016. Moving to Phoenix area later in 2017. In Phoenix, I plan to be a “Ball Girl” at the Diamondbacks stadium, volunteer usher at Spring Training and participate in the MSBL World Series as a player and umpire in retirement.