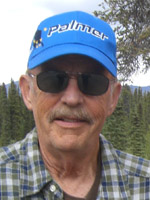 A native of San Diego, I grew up in a hot-bed of year-long baseball. Several of my neighbors were major league players (Ray Boone, Dain Clay, Ted Williams, etc., who wintered in the area. Also, some of the players for the then minor league SD Padres stuck around during the winter and played industrial league ball. There was no major league teams on the west coast at that time, but I recall barnstorming teams of major leaguers (specifically Bob Feller’s) that passed through the area during the winter.

I started playing ball at an about 7. I proceeded to play year round youth through high school BB where I was a year ahead of others of my age. I was primarily a pitcher. By graduation I was tired of school. I turned down a college baseball scholarship. I did occasionally play industrial and semi-pro ball and had a brush with pro ball.

I eventually enrolled in SDSU where I played briefly before turning my attention to getting an education while working as a truck driver. at the Post Office. I harbor no thoughts of could’ve or should’ve been regarding my baseball career. I was not blessed with great natural talent. I just played a lot, was well coached, and worked hard at improving. A student of the game, so to speak.

After graduating from SDSU, I game back east to teach at the Naval Academy (4 years). By then I was limited to playing fast-pitch softball as a catcher. Then, miraculously after almost a 30 year hiatus, I joined the DCMSBL in its second year of existence in 1990 at the tender age of 49. I was assigned to the new 30+ Bowie (MD) Brewers, since I lived in Bowie.

Ironically, I was now about 15 years older than anyone else on the team. When the Brewers moved to Southern Maryland, I joined the 40+ Pirates. I continued on to manage the 50+ Padres. After the team folded after 7 years, I played some for the 45+ Nationals and 55+ Dodgers, although I was hampered by injuries.

I was thrilled with the opportunity to make a “comeback.” I threw my energy into supporting my team and the DCMSBL. In addition to playing and coaching, I assumed several collateral duties including finding ball fields in MD, team rep at managers meetings, helping organize 40+ and 50+ divisions, and serving on the rules committee (including umpiring complaints).

The biggest joy for me was making new friends in the widely diverse world of DCMSBL. Be blue or white collar, of different race, of different religion, etc., we were all equal on the playing field.

Over the years, I was able to play in numerous tournaments including those in Arizona, Florida, New Jersey, and Maryland. I have received my share of awards. Meanwhile, I was an assistant BB coach at Bowie HS (MD) for about 8 yrs. Also, I took up umpiring high school and adult recreational gamed, although I am not particularly proud of that.

At the age of 76, I try to remain active although the body is falling apart. Some umpiring and some 48+ metal and 60+ wood bat leagues. I just cannot give the game up, I love it too much.