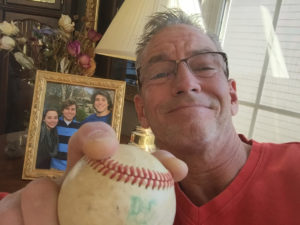 Playing with thirteen different teams, in multiple age groups, in two Fall Classics, two World Series’, several local tournaments, and as part of four DC MSBL championship teams, Bill Kirkendale will be playing in his 25th consecutive season in 2016. And, to top it off, Bill will be joined in the league by his two sons – twenty year old Billy, playing in his third season, and eighteen year old Chris who will be playing together on the reigning champion 18+ Sharks.

Bill was wrapping up his Babe Ruth team’s practice at Four Mile Run in Arlington in the spring of ’92, when having his own kids was the last thing on his mind. Bill remembers a bunch of guys his age throwing around a hardball and then coming onto the field. “I asked about it and how I could play too.”

The late Ricky Blasquez’ Senators – perennial contenders and two time DC MSBL Champs – invited Bill to work out with them, signed him up, and he’s been playing ever since. “Ricky asked me what position I played, I said pitcher, he asked how hard I threw, I said pretty hard, he said to hang around and warm up. Later he put me on the mound against a live batter and I almost took the guy’s head off trying to show off, haha!”

Bill currently plays for the 25+ NOVA Yankees and the 45+ Angels. “It’s such an amazing honor to be recognized as a part of this standout league’s history! I’m overwhelmingly grateful for the DC MSBL and the big part it has played in my life. To keep playing real baseball every spring and summer as I did when I was a kid, and still now at 56, and with my boys in the league! How awesome is that!”